Posted on December 10, 2015 by alexandramartin3

Here are the results of the bacterial characterization of the kittybiome of Roozbeh.

Roozbeh is a playful and adventurous kitten from Berkeley Animal Care Services. At only ten weeks old, it takes a lot to convince him that being pet with a human could ever be as gratifying as chasing toys and engaging his littermates in play. But when he finds a human with whom he really connects, he becomes very affectionate and actively solicits attention. Roozbeh gets along splendidly with other cats, and would do great in a home with an older cat to mentor him (and tire him out as needed!).

Roozbeh is an especially tolerant cat; he was very brave for his vaccines and has put up with the occasional tug on his tail from the young child in his foster home. To Roozbeh, a child is just another person to dangle a toy in front of his face; unlike some kittens, who are especially timid around rowdy children, Roozbeh would likely fare quite well with them.

Roozbeh was adopted but there are other wonderful cats available at Berkeley Animal Care Services and your local shelter.

Posted on December 9, 2015 by alexandramartin3

Here are the results of the bacterial characterization of the kittybiome of Bonnie.

Bonnie is a sweet old cat from Berkeley Animal Care Services who is very interested in all that goes on around her. She is very attentive, and is happy to observe visitors and other cats while she waits patiently for her turn to be petted. For her petite size, Bonnie has a surprisingly loud meow, which she uses to greet anyone who passes by her cage. Because of Bonnie’s advanced age, she is not nearly as active as she probably was in her youth. Though she will make half-hearted efforts to play with toys to be polite, she would much prefer to curl up on someone’s lap for a nice nap.

Just like people, cats tend to accumulate more health issues as they age; Bonnie has hyperthyroidism, which means her metabolism is higher than normal. She was quite thin when she came into the shelter, but luckily her thyroid condition is easily cared for with a once-daily pill. Older cats like Bonnie often have more trouble getting adopted because they may have medical conditions with which people are unfamiliar, but she is a very laid-back girl and would likely do well in a variety of homes.

Bonnie was adopted but there are other wonderful cats available at Berkeley Animal Care Services and your local shelter. 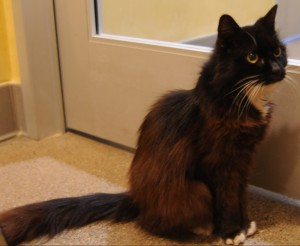 Posted on December 9, 2015 by alexandramartin3

Here are the results of the bacterial characterization of the kittybiome of Gladiola. She is a friendly little kitten at Berkeley Animal Care Services who is always sure of what she wants. She is very vocal about communicating her needs (and sometimes, there are lots of them!). When a visitor comes to spend time with her, she enjoys scurrying up to perch on their shoulder like a bird. Gladiola does not generally have a particularly strong interest in toys, but she did take a strong liking to a certain mouse which now never leaves her side.

Gladiola was found outside of a movie theater on a busy street. Her finders thought that she walked abnormally, so they brought her to the shelter. The veterinary staff found that one of her back feet was broken, as was the tip of her little tail. They believe that at some point, Gladiola got caught in a door and made her injuries worse as she struggled to escape. After giving her some time to acclimate to the shelter, she underwent surgery to fix her broken foot and amputate the tip of her tail. Though her tail is now shorter than normal, that is no cause for concern, as she has plenty of personality to compensate!

Gladiola was adopted but there are other wonderful cats available at Berkeley Animal Care Services and your local shelter.

Posted on November 16, 2015 by alexandramartin3

Here are the results of the bacterial characterization of the kittybiome of a shelter cat named O’Malley.

O’Malley is a big, boisterous cat who is still available for adoption from the Nine Lives Foundation. He’s a well-rounded feline, and becomes immersed in whatever he’s doing – whether that’s taking a nap on his favorite perch or batting at the tail of one of his roommates. O’Malley has a distinctive meow that he uses frequently to remind everyone of how wonderful he is; he’s one of the most talkative in his room. O’Malley’s favorite place to be is above everyone else – literally. He climbs to reach the highest perch in the room, and confidently surveys what he believes to be his kitty kingdom.

O’Malley tested positive for Feline Immunodeficiency Virus, or FIV. It is transmitted between cats usually by deep bite wounds (no feline-to-human transmission!). Many cats with FIV, O’Malley included, are normal and healthy by most standards – O’Malley may be a bit more susceptible to minor colds, but he’s very resilient and doesn’t let anything stop him.

Posted on November 16, 2015 by alexandramartin3

Here are the results of the bacterial characterization of the kittybiome of a shelter cat named Marigold.

Marigold is a petite 1-year-old cat from Berkeley Animal Care Services. She is very affectionate, and once she’s comfortable with you, she’ll be happy to let you hold her all day. When there’s no one around to cuddle with, Marigold takes lots of time grooming her long, luscious fur to make sure she’s squeaky clean when you come back. Once her first guest arrives, she gives a gentle nudge with her head to let you know that she’s ready for cuddling. If you’re slow to pick up on the hint, she’ll delicately place one paw on your lap and wait patiently for a formal invitation.

Marigold is a polite feline, and has gotten along well with every cat, dog, and child she’s encountered so far. She’s more tolerant of tail-pulling and play-biting than many adult cats, and therefore could adjust well to a wide variety of living situations.

Marigold was adopted but there are other wonderful cats available at Berkeley Animal Care Services and your local shelter.

Legends about cats and vampires 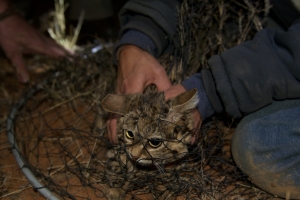 A black-footed cat captured in a net (photo by Holly Ganz).

I had the good fortunate to spend this Halloween in the field collecting samples from black-footed cats in the Karoo region of South Africa. As part of a study that Jonathan Eisen and I are conducting on the coevolution between bacteria and cats, we are collecting samples from as many different cat species as possible. The black-footed cat is the smallest cat in Africa and is endemic to Southern Africa. They are solitary and rarely seen and, fortunately for them, they do not prey upon chickens like some wild cats, so they are not a target of predator control by farmers.

The moon on Halloween (photo by Holly Ganz).

Studying black-footed cats requires spending much of the night looking for them using spotlights. In addition we spent the middle part of the day tracking down cats with radio collars so we could change the batteries (and collect a few samples). After a week of sleep deprivation under a waning full moon, including the night of Halloween, my mind turned to thoughts of vampires and cats. These small cats are quite fierce and have lovely fangs and bright green eyes that shine yellow in the spotlights. Like vampires, they are predators who drink blood and go underground during the day. And they seem similarly upset when you dig them out of the burrow and bring them out into the daylight. The only way to do this is to sedate them first. 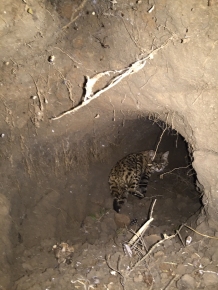 According to Wikipedia, cats are included among the animals linked to historical tales of vampires. From Mesopotamia comes the mythical Lilitu or Lilith, a demon who preyed on men and subsists on the blood of babies. In tales from the European Jews of medieval Rhineland, Lilith was the first wife of Adam who was banished. She became a demon who transformed herself into a cat and charmed her victims into believing that she was benevolent and irresistible. In other sources, Lilith is also depicted as a terrifying blood-sucking creature with a lion’s head and the body of a donkey.

A black-footed cat sedated and fitted with a radio collar (photo by Holly Ganz).

When they are sedated, you can see that the black-footed cats have lovely black spots and stripes and yellow-green eyes. You might be tempted to think that such a lovely small cat would make a nice pet. But in actuality they are fierce little cats who must contend with a lot to survive. Despite their mesmerizing beauty, the black-footed cats are not demons. But for fun, next year I suggest that one of the black-footed cats who is collared is also given the name Lilith.

A cat in a bag

Last week we collected some more samples from FIV positive kitties at the Nine Lives Foundation in Redwood City, CA. While we were there waiting for cats to donate poop samples, we were surrounded by cuteness. These kitties are looking for homes, so we hope this video tempts someone to give them a visit.

Pictured below is Marie, a three-month-old kitten who was recently adopted from the Berkeley Animal Shelter. Marie received very little attention from people during the first several weeks of her life, so she’s still a bit shy. Once she feels comfortable, though, Marie becomes very active and is enticed by the treats, toys, and attention people have to offer her.

What makes Marie especially unique, however, is that she is a female orange tabby. The vast majority of orange cats are male; this phenomenon has a genetic basis. Every cat has two sex chromosomes, with females having two X chromosomes and males having one X and one Y chromosome. The gene for orange coat color is located on the X chromosome (meaning it is sex-linked) and is recessive, meaning that the presence of the dominant allele on another X chromosome essentially masks the orange coat gene. Thus, for a female to be orange, she needs to have the recessive allele present on both of her X chromosomes, which is statistically quite rare. Male orange cats are much more common because they need the allele to appear just once, on their only X chromosome.

Posted on September 4, 2015 by hollyganz

Here is an updated map with all kittybiome participants who have sent in samples and filled out the survey as of September 24th. To date, we have received 117 samples (including some duplicates) and we have received survey information for 98 cats.

One of our collaborators, the wonderful Dr. Jennifer Gardy tweeted about her experience collecting samples for kittybiome:

Note: the second tube is a back-up, just in case you need it.

Step 3: proceed to litter box (modkat by @hellomodko) with @kittybiome subject Danny, along with supplies. pic.twitter.com/ybNo8OzKi5

Step 7: like a true microbiologist, root around in the poopie for a bit. @kittybiome pic.twitter.com/5f2GTsIMWl

@jennifergardy I think I better storify this